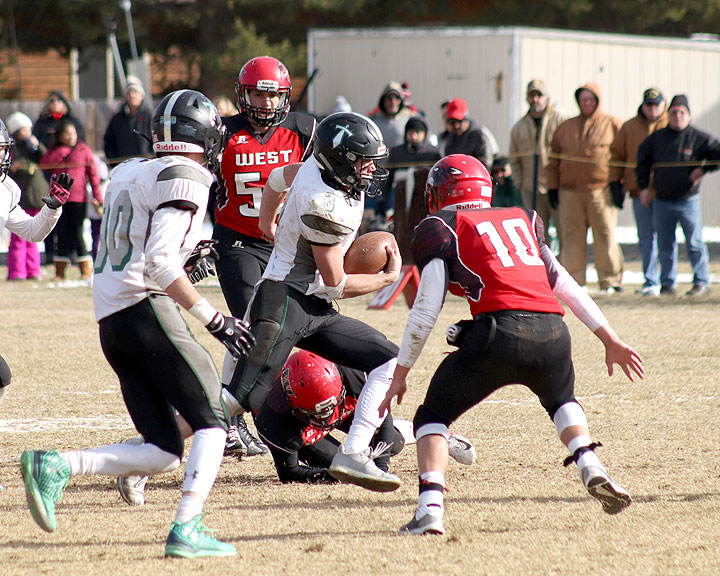 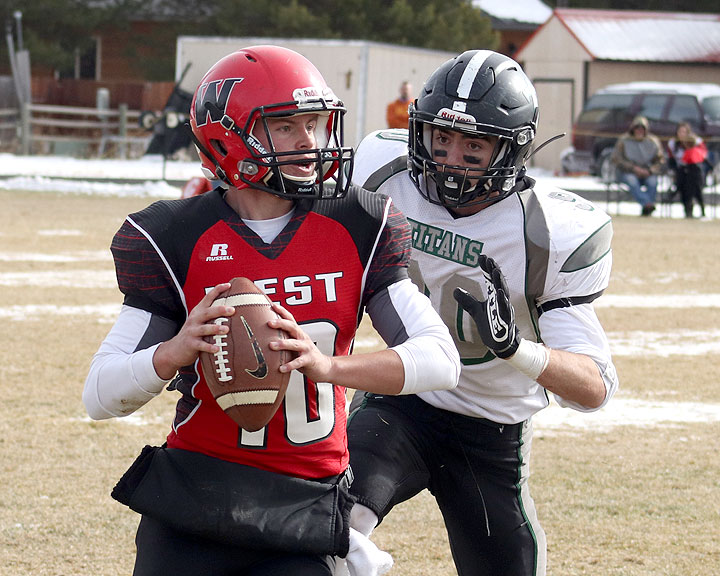 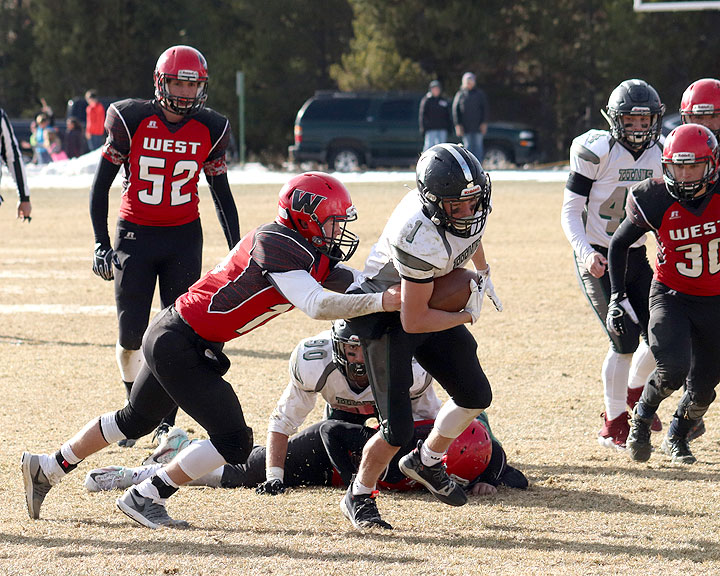 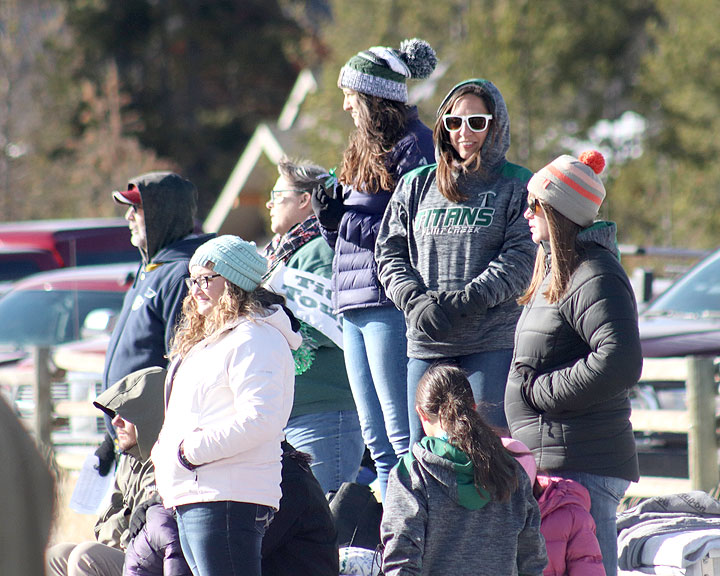 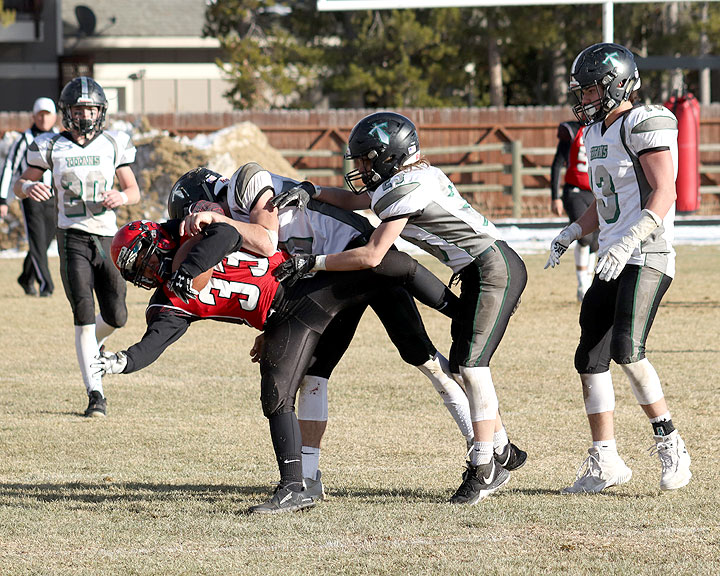 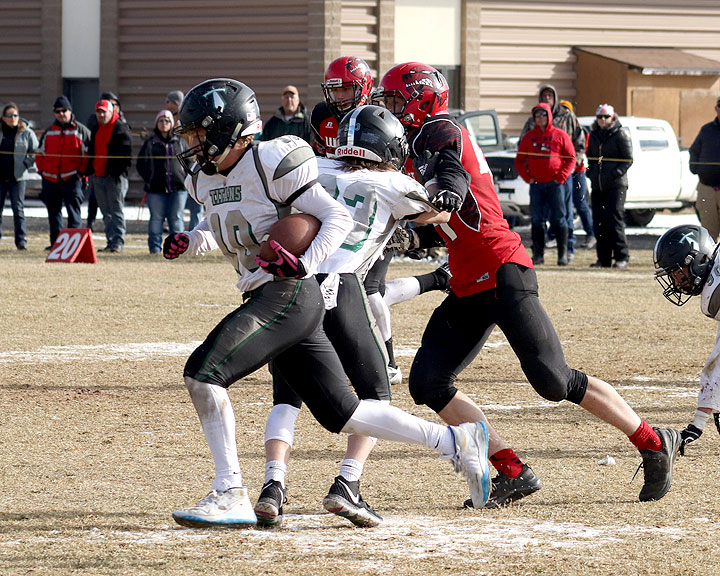 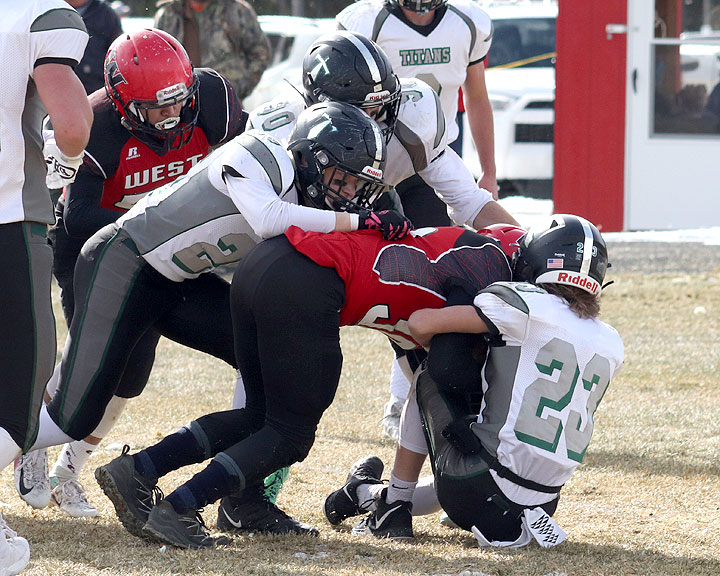 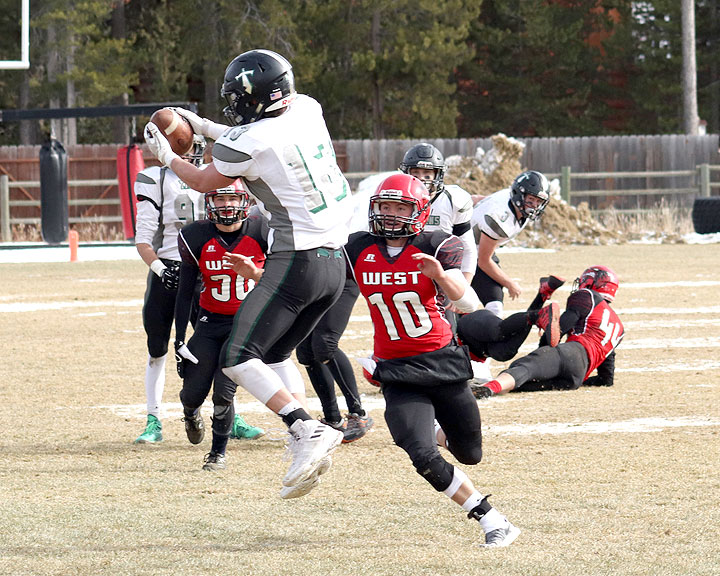 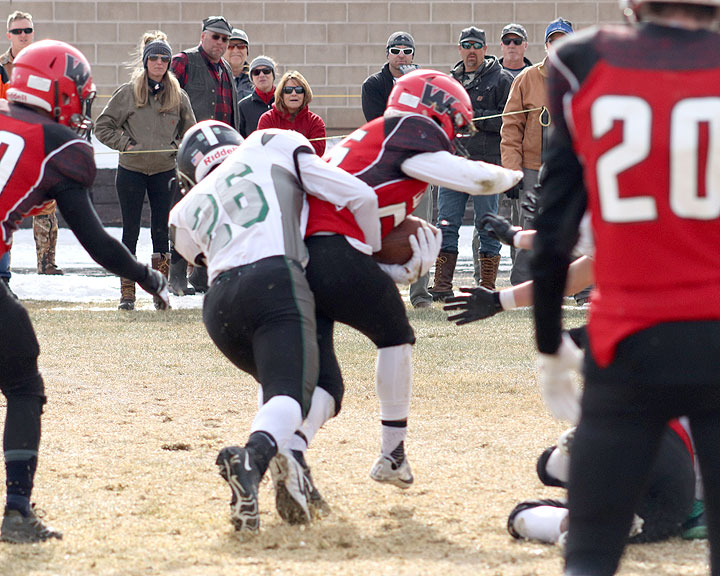 WEST YELLOWSTONE – After 48 minutes of play the West Yellowstone Wolverines and the Flint Creek Titans were no closer to deciding who would advance to the second round of the MHSA 8-Man Football Playoffs. Both teams were tired, bruised and scored 32 points.

It was an overtime duel that would decide game. Both teams scored on their first possession, but only the Titans could find the end zone when junior QB Kade Cutler punched the ball in from five yards out. The score gave Flint Creek a 46-40 double-overtime win and the right to advance to the second round of the 2019 postseason.

See the game winning score and celebration exclusively on the Flint Creek Courier!

“Our kids didn’t necessarily play well at times but man are they resilient,” said Titan Head Coach Mike Cutler after the game. “They just believe … and you can’t break that. I’m riding ‘em and Coach (JC) Holland is riding them and they just believe that one way or another we’re going to get it done and they did.”

It was a game that saw both teams pushed to the brink of exhaustion and using everything in their arsenal to try and secure the win.

West Yellowstone opened the game with a six-yard scoring from Matthew Burden and a 6-0 lead. 2-1/2 minutes later Flint Creek responded with their own six-yard touchdown run from Kade Cutler to know the game at 6-6. Cutler had seven touchdowns on the day, six on the ground one 27-yard scoring pass to Daniel Brabender in the second.

After stringing three scores together that ended with 4:11 to play before halftime and an 18-6 Flint Creek lead.

But the Wolverines weren’t done.

Yellowstone quarterback Mac Hauck tossed a pair of touchdown passes to Miguel Salinas and Sam Coffin, the latter with just 21.3 seconds to play in the period. Hauck pushed the ball on the conversion and gave the Wolverines a 20-18 advantage at the break.

Each team added two more scores in the second half, but only the Titans were able to convert on a point after and forced the game into a 32-32 ties as time in regulation expired.

Overtime in high school football consists of one possession for each team starting at the 10-yard line and getting four downs to score. Flint Creek won the toss and opted to take a crack at it first.

Flint lost yardage and was forced back to the 20, but it only gave Cutler more room to run. We wove his way through the Wolverine defense for the score. He then hit Preston Metesh with the conversion pass to put the pressure on the opposition.

West Yellowstone responded with a 10-yard run by Salinas, followed by Hauck rushing in the point after.

"We coach these kids hard and we get criticized for that a little bit and that’s okay. But they respond to it and they know that we love ‘em. ... I wouldn’t trade a one of them." ~ Mike Cutler

Tied at 40-40, the two teams went to a second try with the hosts going first.

The Wolverines got within four yards of the end zone, but failed to score when Jonathan Resendiz fell as Hauck tried to hit him with a corner pass. The ball turned over to Flint Creek which pushed the ball in for the five for Cutler’s final score of the day.

“It was supposed to be a pro left, veer left but I did my own thing and goosed it,” said Kade Cutler, who called his own number on an audible for the winning score. “It’s Amazing! Just feels great. We just always fight. We never give up, ever.”

His father, Coach Cutler, beamed with pride after the playoff win.

“He just checked it. He did a lot of that today. But that’s a coach’s kid. He sees stuff that I can’t because he’s on the field and I’m on the sidelines. I certainly wouldn’t trade him ‘cause I love him. He’s a great kid.

“We coach these kids hard and we get criticized for that a little bit and that’s okay. But they respond to it and they know that we love ‘em. This is a unique group and I’ve had three unique groups these last few years because kids just aren’t this way anymore. They take their butt chewings or whatever and they’re accountable and they know they need to be accountable to their coaches and their teammates. You know, I wouldn’t trade a one of them.”

In reflecting on the loss, West Yellowstone Assistant Coach Jess Matthews was proud of his team and their accomplishments.

“They’re a good team and they have good players. I’m just proud of our kids to put this thing together with 13 kids and win a conference championship.”

Flint Creek now advances to the second round where they will face Great Falls Central on the road. The Mustangs defeated Carter County 41-18 in their opener. The game will be a rematch of last year’s 8-man championship which saw the Titans claim their second straight title, 50-14.

Titans make a statement in Charlo, 46-0